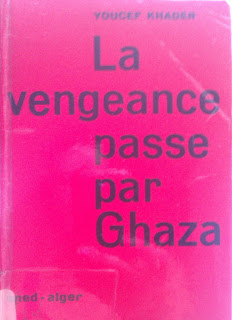 The history of the Algerian spy novel pretty much begins with Youcef Khader and Abdelaziz Lamrani.

Youcef Khader is the pseudonym of Roger Vilatimo, a French spy novelists who published an enormous amount and under several pseudonyms.  Algeria inspired Youcef Khader's spy book series are as such they undoubtedly form a part of Algerian spy and crime novels.

Khader published six spy novels where the many perilous missions of  Mourad Saber aka agent SM 15 unfold.  Saber is 30, Algerian through and through meaning of course honourable, noble, fearless, stubborn and quite nuts.  His past is explosive: he was an ANL fighter in the Aures region, then he was promoted to work for the Military Security (the SM) in counter-intelligence. His nickname is Shams El-Din, the sun's faith, oh yea!

Mourad Saber is of course incredibly gifted: he speaks a wide range of languages with no accent, has an uncanny sixth sense for knowing without looking who's hidding and planning a threatening move (useful in night time combat or blinded by the sun), is well-versed in martial arts which makes him deadly at close range (the 'ninjas' were a reality of Algeria's recent history) and most of all his causes are pure.

In Vengeance will come to Gaza (La veangeance passera par Gaza), this noble spirit will fight against injustice and this brings him to Gaza to bring vengeance, as the title indicates.

We're in the 70s, and Saber is called on by his unit in Algeria to go and help Fateh, the Palestinian political party, to help clean up Palestinian resistance-cells who have been infiltrated by the Israeli army.  Every planned strike against the Israeli army fails and has been failing for some time screaming sabotage. It has therefore become clear that a mole or several have infiltrated the group and they must be found. But there is so much mistrusts between Palestinian agents and the Palestinian people that Fateh decides to bring in someone from outside who will be able to see the situation with a fresh eye, unbound by alliances to assess each individual impartially.

Vengeance will pass through Gaza was written in French and has not been translated. It's a very enjoyable and well-balanced spy-novel. I had anticipated, given the subject and the era it was written in, that it would be quite caricatural, but it is not.  Not every Israeli army man and woman is evil, far from that. Even in the army, the author openly discusses the attempts by Jewish army men to counter the gratuitous violence and sadisms that israeli army agents, who are simply blood thirsty muderers hiding behind an army suit, impose on Palestinians. Khader makes his Jewish men and women characters talk of their utter disgust at seeing the same violent methods they suffered at the hands of the nazis being used by their own people against Palestinian civilians and resistants alike.  In a parallel manner, he broaches the subject of Palestinian who do not want to fight the Israeli army and Israeli colonisation, not because they are traitors 'to the cause' but because they are tired, frightened and disheartened.

Khader lays it on thick with the 'race' thing though. The Arab race, the something race, the this and that race.  It is not Khader's fault necessarily, I have a pet hate for the term.  Race is one of the most misused words in the story of naming.

All in all, great plot, well written, entertaining and engaging novel.  Next up, Mohamed Benayat.