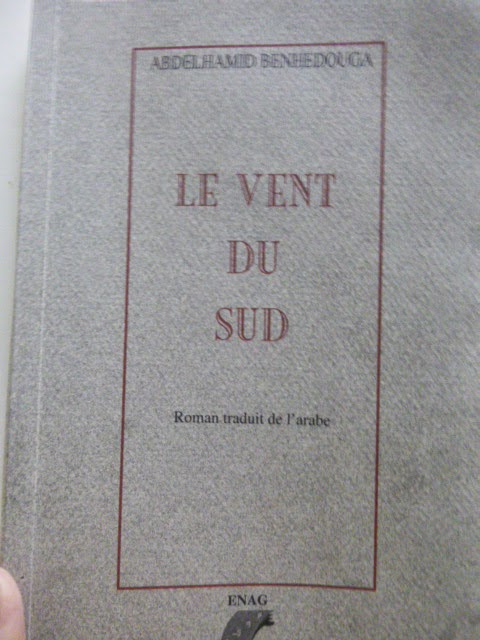 Do you know Johnny Cash's song I hung my head? A man goes out to practice shooting, early one morning. Not paying particular attention to his surroundings, he fires into the distance and his bullet shoots a rider down. I always felt this song captures the fixed and unforgiving essence of doom, how one single moment, one single action, can make your entire life tip over, to merge the real and the nightmares. Perhaps we've all been at the threshold of such moments? Perhaps not. But it is the kind of texts that sends ice cold waves down one's spine (well mine), because it tells and foretells life's potential for horror.

Abdelhamid Ben Hadouga's novel 'The South Wind' sends such shivers, only they will be burning, as burning as the guebli-wind.

The story is set post-independence (the novel was published in 1971) and the Algerian government is about to implement its land redistribution plan. Nafissa, a young university student, returns to her home village for the holidays. As soon as she is home, she begins to miss Algiers and her student life there. Everyday spent locked up in her home makes her feel more contempt and scorn for what she sees as a suffocating patriarchal society, one that forces women into the role of mere obedient puppets at best. She begins to loath her mother Kheira, and to decides to renegade against her wealthy landowner of a father Belkadi whom she overhears telling her mum he has decided to marry her off, Nafissa, to the Mayor. This mayor is the former fiancé of Nafissa's now dead-sister. Whether Nafissa likes it or not, whether Kheira likes it or not, Belkadi has decided, and besides, these women's likes or dislikes are not even a consideration. Nafissa's naïve attempt at an escape tips her life over, and that of two others, into a dark and petrifying end. "And all for no reason" as Johnny Cash sings.

While this was written in the late 60s and describes what I imagine to be the mentality, partially, of this decade and the previous one, it perfectly mirrors my current experience in Algeria so far. I wonder how deeply anchored the mentality and the clash that BenHadouga describes, but still today, I've met his description of men's and women's condition and beliefs and it is as live and kicking as a new born baby vampire. What I'm pretty certain of is that the village-city or village-capital separation no longer applies, perhaps because the composition of Algiers and large cities have changed.

Abdelhamid Ben Hadouga was a prolific Algerian writer, born in 1925, who wrote in Arabic. He is one of the most important figures of the Algerian novel and of Algerian literature, with Mohammed Dib. SNED editions translated him into French in 1978. Ben Hadouga passed away in 2012, Waciny Laredj wrote his obituary here. You can find a very good synopsis of TheSouth Wind here. If you're in Algiers you can find Ben Handouga's South Wind at Kalimat Library for 650DA.