Yasmina Khadra - What are monkeys waiting for? 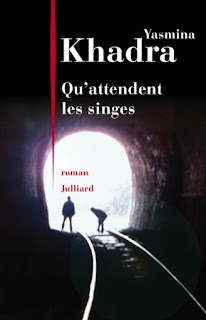 
Nora, chief inspector in Algiers' police force, is called one early morning to Bainem forest where a young girl has been found murdered, mutilated. Nora begins her investigation in a seemingly present-day Algiers, where the city's background are cursing taxi drivers and former hustlers turned power-holders. Its foreground, a corrupted Algerian press and a gangrened intellectual scene. With a will of steal, incorruptible and supported by a team of male colleagues only misogynist and homophobic on the surface, Nora begins investigating and won't give up nor give in until she unspins the net an aged serial killer has woven.

Y.K. keeps the story fast-paced and as the criminal investigation unfolds, Khadra shoots at, not the expected grimy politicians' world, but at the Algerian press and the corruption that gangrenes its reports because of too long a relationship with State decision-shapers who have forgotten they are vincible and... mortal.

In this new detective novel, as in his early ones, Khadra hat-tips the Algerian people's spirits, an acknowledgement of the 'everyday' Algerian who remains nameless, humble, and who has not forgotten what is dignity nor has given up on it.

The book finishes on an end and a post-end, a Tarantino-like finish, followed an open letter of sorts, not unlike those that have been exchanged by real politicians of late. But the one Khadra pens on behalf of his fictional characters is crucially different to those sent by living contemporaries: it is a dialogue not a monologue. The final show-down between Khadra's two surviving characters, a legitimate man and an illegitimate ruler, is a closing text reminding Algeria's powerful that human evolution is inescapable, nature always wins and so does death.

All they have to do to make the transition... is to become human.

Yasmina Khadra's new novel What are monkeys waiting for (Qu'attendent les singes) was released on 3 April 2014 by Julliard eds. The non-francophones among you are going to have to wait a little to read this compelling detective novel until the original French edition appears in translation. But francophone readers can enjoy Khadra's return to crime fiction immediately – after all, there aren't that many perks to reading French and this is one. Also available on Kindle.