The version of the book I found is 200 pages long with several pages printed twice, one after the other (which made for some surreal late night reading). It was published by l'Entreprise Nationale du Livre, Algiers in 1991. 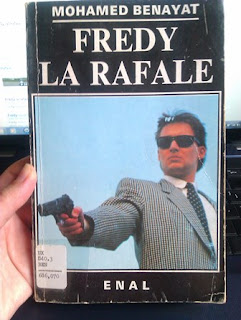 It's a short novel, fast-paced and quite well written when the author gets going.  There are several parts, the beginning in particular and middle sections, which are disturbingly. stop. telegraphic. stop. written. in.stop. hic-up style (fortunately nothing like the he said-she said-he said-she said-he replied  torture of that awful book Djibouti by Elmore Leonard... never buying a New York bestseller ever again...)

Fredy La Rafale is set in France, just before and just after the 1961 massacre of Algerians in Paris.  Our dear Fredy is a French rogue, 50% justicier, 50% bandit, 100% drunk and 200% philosopher of life, who is hired by a young woman, an Algerian FLN activist who was kidnapped with her brother by four harki guys.  These militias operated in Paris, hired by some members of the French police or tolerated, to keep the Algerians in check.  They kill her brother in front of her, rape her and leave her for dead on a train track. She (Soraya) manages to escape a running train, makes it back to Paris and goes to her friend, a German woman married to a French policeman. This couple still remembers the second world war and its horrors (ie they hate torture and support Algerians).  The German woman has been helping Soraya for a while to transport suitcases of money the FLN used to have transferred to various elements within and without France. She is clearly a sympathiser of the Algerian cause. Her husband is equally valiant and kind. Although a policeman, he represents the many French who were against the segregation and mistreatments Algerians endured, and speaks of giving agency to Algerians so that they can choose the destiny of their country.

Fredy and his two side kicks accept the challenge of (and the fee for) tracking down the head of the militias, a sadist harki called Bouledogue who loves stuffing his face with couscous, beats his prostitute girlfriend senseless as a hobby and is, among other unspeakable traits in Benayat's eyes, a sodomite.

While Fredy is training for his mission (he's sobering up) in a remote countryside house outside Paris,  running up and down the canal like Rambo while philosophising on life and the murder of his girlfriend and unborn child, Soraya's policeman friend makes a big mistake during one of his run-ins with his hierarchy: he openly complains about the torture taking place in the basement of their police station.  To show who's boss, a harki militia headed by Bouledogue is dispatched to his home where they burst in on the couple at night, and kill both. But these two have a 12 year old son, Alain. He manages to escape the harkis and knowing Soraya's and Fredy's haunt, walks there in pyjamas for over 24 hours. He manages to reach the pair and tells them his parents have both been murdered before him (and his mum was pregnant).

Now Fredy is super pissed off and a fast-paced 24 hour all guns out ensues, 24 style, with the aim to go and wipe out Bouledogue and his crew. I won't tell you how it ends. Well, only this bit. Soraya and Fredy don't hook up, because Soraya has sworn never to date a French guy. She also stays behind to keep fighting with the FLN and is sent to the djebel.

Fredy La Rafale is a light and very enjoyable story if you like the polar genre.  It is really nutty in places though (I haven't told you about the acolytes).  A big thumb up for me, are the music references such as HonkyTonk Man (I'm cool, I'm cocky, I'm bad!), Fredy's favourite Golden Earrings, Bob Dylan and Johnny Cash. Great tastes Benayat.


Fredy La Rafale did remind me strongly of the recently published Le Mur, le Kabyle et le Marin (The Wall, the Kabyle and the Sailor) by Antonin Varenne, also set in Paris for the most part.

PS: Incidentally, I haven't found any bio for Mohamed Benayat, my Google search only match a film maker and may be it is the same person. Anyone of you knows of him? Ta.

MnarviDZ said…
I am not into polars but I want to read this one!

This is funny!! I am the son of M. Benayat and I just now discovered your post.
Since my father is not very into the internet I will shed light upon your questions.

Yes my father is Filmaker and author.

And no Fredy la Rafale is not his only book he wrote. Just recently (like 1 year ago) he has published a new book under the title "Le pouvoir des Ombres"

Right now he is writing for bigger Film productions who like his fast paste style of writting. In this second he sitts next to me and is writting a "court métrage" about a young japanees woman who takes her vengens on elderly people because of her somewhat messed up childhood... more to come if your interested ;)

I would say his style of writing has not much shifted althogh he got older. He writes very descriptive and fast paste, it often reads like a manga/comic but very well spoken and very much cut to the chase.

If oyu have any further questions, dont hesitate to ask.

Actually what I might do is to release chapers of his new book, every once in a while if you could give me a platform to do so?

Anonymous said…
If this Mohamed Benayat was in Nancy in 1971-72 ... I helped with a short film he was making at the time ... Glad to know he made his way in the world of film which was his ambition even when he was so very young !
-Robert Fields Jeantet
rj74210 (at) gmail (dot) com