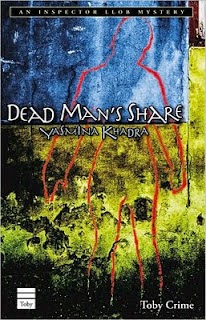 In the Algerian-authors-who-write-detective-novels league, Yasmina Khadra has to be top man. It pains me to say this I must confess, not because interviews have put the spotlight only on his egocentric traits making him a rather indigestible character, but because of the sheer Russian- roulette-style of his work.  I’ve often wondered, how can a man write so outstandingly well (see his work’s crown-jewel L'Olympe des infortunes, 2010), and in parallel write so shockingly badly (see the abysmal L’Attentat translated in EN by John Cullen as The Attack). These manic up-and-down literary turns leave me baffled, but admittedly, keep me interested.

This aside, he never fails in the detective fiction genre. His very enjoyable and well-netted Inspector Llob series can't be put down. The central theme of Khadra’s detective stories is corruption within the police force and politics, and he explores how these corrupted worlds both merge, clash, and merge again, thereby putting his finger on the very pulse of how the regime functions in reality. Recently, he added another layer to include corruption in the Algerian media in What are Monkeys waiting for, with a new lead character, a woman-and-lesbian Algerian detective.

In Deadman’s share, Superintendent Brahim Llob is bored out of his mind in a seemingly crimeless Algiers. Boredom makes him irritable and the latest antics of his partner Lino, a handsome and promising young guy from the popular area Bab El Oued, are also beginning to unnerve him, both because Lino is getting out of control, no longer showing up for work, and because he suspects Lino is getting entrapped by his latest catch, a woman whose identity no one even dares to guess.

To try and lift his spirits, Llob pays a visit to Allouche, an old friend and former psychiatrist, once a great intellectual the regime crushed (he was kidnapped and horrendously tortured), and who now resides in a mental hospital. When Llob gets there, Allouche has a favour to ask: a presidential grace is about to let loose a serial killer. He begs Llob to tail the man that state institutions have named SNP because his real identity was never established.

SNP turns out to be more than an explosive case. Long ago, at the dawn of post-independence, the Algerian maquisard The Left-Handed was planning his next move: to take over his village’s land and production - post-independence also meant the country was now up for grabs. In the night of 12 to 13 August 1962, he orders his Henchmen to drive the Talbi family and two others into a forest and has them brutally murdered. Over the years, the Left-Handed’s ferocity propulsed him to the highest spheres of power. He is now one of the most influential generals of the Algerian regime, seen only in Algiers' most select areas, and accompanied by the most beautiful of women. One of these women is none other than Lino's latest catch.

While the Left-Handed is preparing revenge for an affront committed by what he defines as trash from Bab el Oued, little does he know both History and someone else's revenge are about to find him and make him pay for that fatal August night in 1962, during which, unbeknown to anyone present, one Talbi child escaped.