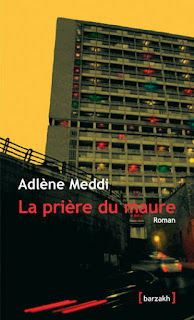 The story is set in February, we are not told the year but we are in the second half of the 90s when war raged in Algeria between factions, armed groups, police and army cells, using civilians as ammunitions. Events unfold in Algiers and Tamanrasset.

Djoudet, or Djo, is a retired Chief Superintendent, widowed, with a son who lives abroad and with whom he rarely speaks. He had gone to live in Tamanrasset but had returned to Algiers for a few weeks, which turned into months. One morning, he receives a phonecall from Zedma, the Kalashnikov-ed leader of an Islamic group. Zedma asks Djo to repay an old debt. He had once saved Djo’s life during an ambush. The government had always tolerated Zedma and those like him. But now, mysteriously re-emerging after a six-year absence, Zedma reappears on the scene protected by the government.

Zedma, still head of an armed Islamic group, asks Djo to find a young boy, Amine, who has disappeared. The young receveur, a bus driver assistant who sells tickets during the journey, had decided to spend the night at the station after the bus’s last run because of the curfew. He was never seen again.

Djo accepts but of course knows Zedma is not giving him the full story. He calls on his brother Aybak, a high ranking Colonel, and asks him to discretely hunt for information on other events that may have occurred that night. Djo also asks a couple of trusted friends, journalist RAS aka Rostmi-Abdelghafour Sofiane, and his former colleague Zine, to hunt for information.

He quickly discovers that the Algerian Security Services are keeping an explosive secret: the only daughter of the all-powerful DRS* chief was murdered on the same night that Amine disappeared, and in the same area.

To keep their own investigation secret, the DRS is killing all those who may have heard of the events and Djo has walked right into their mine field.

Meanwhile, and in parallel, we are told the story of Structure, the mysterious chief of the DRS, from his early days as assassin during the revolution, to his calculated and ruthless climb in the highest spheres of the military, and eventually of the Intelligence section.

Algerian current affairs’ readers will already be familiar with a similar figure, always spoken about in dreaded terms and referred to as the God of Algeria.

Has Structure been dealt a powerful blow by his enemies? Has his daughter been murdered as a result of a lover’s tiff? Structure will find whoever has committed the crime, but will he catch up with the murderer before he is himself murdered?

Adlene Meddi’s language follows the polar style, full of dark humour, fast and ironic retorts, with a narration built on word play (too many for me towards the end, but that’s subjective). Tragic fates and inescapable ends tie these parallel stories, and in the style of a legend or myth, Meddi reminds his characters and readers that even the lives of gods have an end.

While La prière du Maure belongs to the crime fiction genre, it also crosses borders into a larger narrative that blends in elements of political fiction.

This novel, while written in 2008, would make for an interesting debate today, especially given recent events and developments on the Algerian ‘political’ scene as running parallel to the investigation of this retired Superintendent, the ascent of the mysterious Secret Services’ all-powerful leader is told, a ascent that ends with his assassination.

* Algeria’s Department of Intelligence and Security

Anonymous said…
I read the book some time ago. I didn't like the style and I hated the message behind: a cheap blatant pro"mokhabarat" propaganda. I preferred by far, the Yasmina Khadra "Qu'attendent les singes" fascinating and absorbing style as usual, with a strong message ; and the end was surprising and daring. The complete opposite of Meddi's lame novel.
16 October 2015 at 11:29

Nadia Ghanem said…
Hi Bintjezeyer, thanks for dropping by! Meddi definitely spurs on the 'God of Algeria' theme yes, just like in his journalism work in fact.

Khadra is in another league altogether, I really enjoyed Qu'attendent les singes too, and a crime story with (finally) a woman Inspector.
16 October 2015 at 12:07